Visiting Yad Vashem: An illegal photograph and a shoemaker whose children have no shoes. 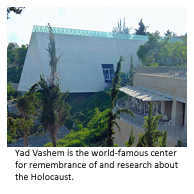 I hadn't been to Yad Vashem in more than 25 years. Established in 1953, it is the world center for documentation, research, education and commemoration of the Holocaust. Here, too, much had changed, and much remained the same. The location is as breathtaking as I remembered it to be: set high on Mt. Herzl, overlooking Jerusalem, with an expansive vista of hazy mountains, clusters of Cyprus trees and the golden city below. There are pristine connecting paths and spaces between the visitors center, the main museum, the museum of holocaust art, the hall of names, the research buildings, the beautiful gardens and memorial sculptures throughout the grounds of this world-renowned memorial center. There are plenty of places to pause, to think, to feel, to attempt to take in the enormity. 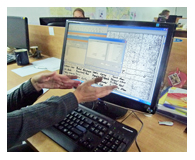 I am meeting Cynthia Wroclawski, the Manager of the Shoah Victims' Names Project – Yad Vashem's endeavor to collect all 6 million names of the Jews who were murdered. Thus far they have collected more than 4.3 million.  I have been working long-distance with Cynthia for the past several months in my role as Holocaust Community Services Director to help collect names from our Chicago survivor population. At our socialization events for survivors, and in our mailings and personal outreach, we have been working with Cynthia and our Chicago Names Project volunteer Izzy Krakowski to facilitate the project. We have been helping our community fill out "pages of testimony" for those who were killed and "survivor registration forms" for those who made it.

Even minimal information about relatives, neighbors and friends is relevant -- the names of those who were lost need to be recorded and remembered – if not now, when?  A survivor in the weekly Coffee and Conversation group I co-lead at the Illinois Holocaust Museum has worked with Izzy to fill out 18 pages of testimony for his murdered brothers, sisters, aunts and uncles. It was a difficult, emotional process which took almost 4 hours...but it was an obligation fulfilled.

There is also a huge effort to target the "Missing Names" of those who were killed in the Former Soviet Union. In the Nazi-occupied areas of the FSU, an estimated 1.5 million Jews were killed. It is sometimes referred to as the "Holocaust by Shooting," as most were shot to death in their towns and villages, often in mass graves in forests. The Nazi "Einsatzgruppen" – the killing squads – would typically force the Jews to dig their own graves before being shot.  For these Jews, unlike those who were in German-run concentration camps, there are no meticulously recorded transport or death lists. There is no documentation except for the photos and stories saved by those who somehow escaped their deaths. We continue to assist in the effort of remembering them by providing Russian-translated pages of testimony, survivor forms, and links to the Yad Vashem website about these untold stories:

I am keenly aware of this FSU group, of their untold stories, as our Holocaust Community Services program in Chicago has been assisting FSU survivors who were born in these occupied lands and suffered great hardship and losses. They continued to face the hardship of Soviet regime through the post-war decades, and our Jewish community, like many around the world, helped to bring them to the United States in the 1980s and 90s. Now, as they age and face the multiple repercussions of years of dismal health care, many are still living on the edge and are in need of our support. 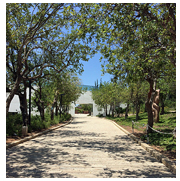 Before we meet to discuss our work, Cynthia suggests that I go through the museum and says it may take several hours. I have been to many holocaust museums around the country and the world. I think that I can probably walk through fairly quickly and have plenty of time to meet with Cynthia. But I am drawn into every exhibit, every photo, every testimony, every object or piece of art or personal belonging that once belonged to human beings who were killed because they were Jews. They could have belonged to my family.

I am hit by emotions at moments that I didn't anticipate.  When I pass by a display case of empty cans of Zyklon B, the gas that was fed into the shower rooms to exterminate millions, what hits me is that these particular canisters are from Majdanek, the camp where my maternal great-grandmother perished.  Her name was Cecelia Feuerstein Landau.  I realize that I must make sure there is a page of testimony for her. We have no idea where my grandmother's father or brother were killed. Their names were Oskar Landau and Meinhard Landau. 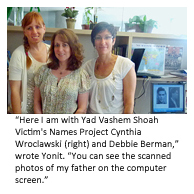 At the end of the exhibits, I am rushing to meet with Cynthia, but telling myself that I must come back to spend more time here. Once again, however, I am stopped in my tracks, this time by an exhibit of the ships that came from Europe after WWII to Palestine -- the clandestine and dangerous journeys known as "Aliyah Bet." My father came on one of those ships in 1946. It is prohibited to take photos at Yad Vashem, but I decide that snapping an "illegal" picture of the illegal ship which brought my father to Palestine would be more than ok.

When I meet Cynthia, she takes me to the back rooms of the Names Project, where about a dozen staff members sit in front of computers with stacks of books and papers.  They are deciphering names from transport lists, old photos, even from Orthodox eulogy services that often mention those who perished in the Shoah. It is a meticulous and labor-intensive process, but of great import. When we return to Cynthia's office, she and her assistant, Deborah, check the database for my family members. I have used the Yad Vashem archives and databases to research my Shoah history – to find, for example, the cousin who had my father's letter in her family papers -- but, as we soon learn, nobody has ever filled out pages of testimony for my father's family or my maternal grandmother's family. I have been encouraging others to do so, but as Deborah says, "the shoemaker's children have no shoes" -- and so they give me the forms. I start by completing a "Survivor Form" for my father Gershon Hoffman.

Photo caption: Garden of the Righteous -- In 1963, the Israeli Parliament ordered Yad Vashem to honor non-Jews who, during the Holocaust, saved Jewish lives in life-risking circumstances without intending to receive a reward, monetary or otherwise. Many of their names are inscribed on memorial walls in the Garden of the Righteous Among Nations – in fact, more than 21,000.