Finding Connection to the Holocaust and Hamburg, in Jerusalem 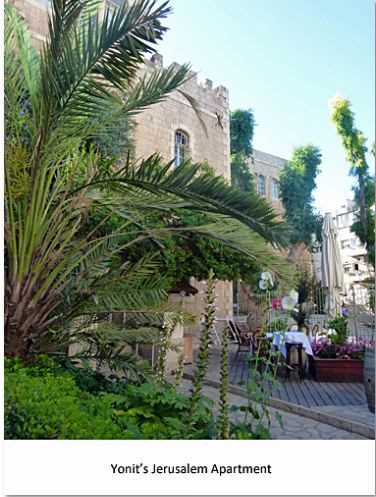 I take the bus to Jerusalem on Friday, arriving before Shabbat to meet my friend and co-researcher, Judy Kaplan-Weinger. We meet at the apartment I've rented for our stay in Jerusalem. It’s in a beautiful old building around the corner from the Bezalel Art School and located within walking distance of the city center and beyond it, the Old City. The chamseen (hot desert wind) has passed, and the weather is sunny and clear, with a perfect temperature for strolling and exploring.

There is an art fair a block away -- it only happens on Fridays, and it is filled with beautiful art and beautiful Israelis. In another one of those magical moments, I start to speak to one of the artists named Dahlia who looks remarkably familiar to me and who feels the same way about me. Although we cannot place the original connection, if there was one, we discover that she is the daughter-in-law of a Holocaust survivor from Hamburg and has just a few months ago been there to memorialize those who perished – a gathering similar to the one I will be attending with my family next week.

Of course, the coincidence doesn't end there -- she and her family were also in Hamburg to set memorial stones in the sidewalk in front of the house where the family had lived. These are called Stolpersteine – "stumbling stones" designed for Hamburg residents and passerby to "stumble" over as a reminder of who lived there and, if known, when they were deported and where they were killed. My family and I had done the same three years ago.

As it turns out, the Israeli artist had been accompanied by the same photographer who had recorded our experience in a book. Dahlia suddenly realizes that she looked through the book in Hamburg and thinks that perhaps explains her familiar feeling about me.

We exchange contact information, and I have no doubt that we will meet again.