This blog is part of the series of “Yonit’s Journey: Light Out of Darkness,” a narrative of Yonit Hoffman’s month-long trip to Israel and Germany to attend Holocaust-related events – some public, some personal. The director of JCFS Chicago’s Holocaust Services program and an authority on the psychology of Holocaust survivors, Yonit is the daughter of a Holocaust survivor and descendant of Holocaust victims. See links to other posts at the end of this post. 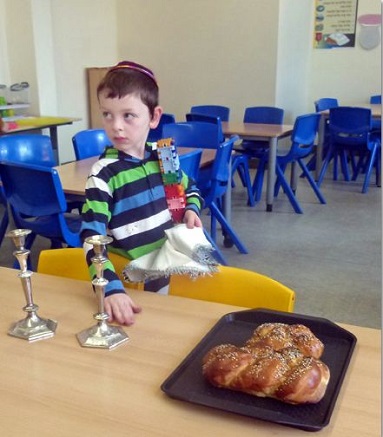 Throughout the week, most of our group quickly bonds. It is as if there is an unspoken familiarity, and we somehow find a balance between listening to each other’s stories, sharing our own, and finding and wondering about common experiences and crossed paths. The balancing act is, at least for me, a constant process throughout our visit to Germany.

Caption: Talmud Tora -- re-opened in 2007 as a Jewish Day School and now has over 200 students who study a German and Jewish Curriculum.  Not all are Jewish but the school is known for state-of-the-art education, as it was in former days, so some non-Jewish families also accept the dual curriculum. Much of the Jewish community now is of Russian descent, and new immigrants are from the former Soviet Union. The students were preparing for Kabbalat Shabbat the morning we visited.

The organizers have also tried to balance our program between the old and the new Hamburg – we take a canal boat ride through the bustling new harbor area and then a walking tour through the old Jewish neighborhoods; we visit the schools where some of our parents and grandparents were once students, and spend a morning at the Talmud Tora Jewish school there, which has come back to life with children born in Germany and given Hebrew names. We walk over the brick outlines of what once was the Great Synagogue, burned down on Kristallnacht, and later we celebrate Kabbalat Shabbat at one of two modern-day Jewish congregations. 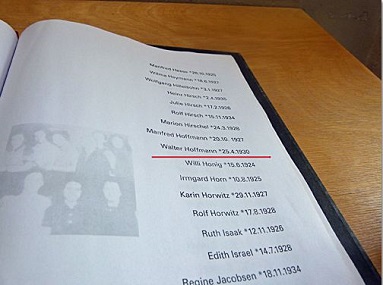 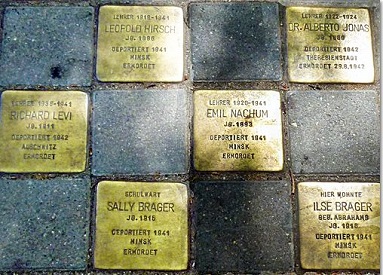 Caption: Emil Nachum -- Outside the Talmud Tora School are the Stolpersteine with the names of teachers and administrators of the school who were killed.  In the center is the name "Emil Nachum" who was related to my father's kindergarten teacher as we found in a photo labeled by my grandmother.  He was also deported to Minsk Ghetto.

One night, we have dinner with Hamburg residents and students who are interested in meeting us. A woman at my table is wearing a "Chai" necklace (the Hebrew word for life), and we quickly learn that we have our professions in common - she, too, is a psychologist. When I ask her what has brought her to this gathering, she replies, "Well, my father was Jewish, and my mother was a Nazi."  We talk most of the night about the complicated and delicate balance that she has experienced, and again, I find myself trying to balance a mixture of contradictory emotions - horror, sadness, fascination and eagerness to know, but not know. 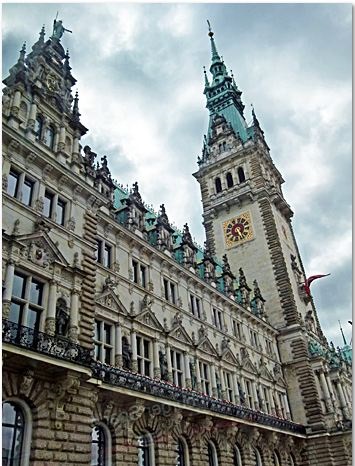 Caption: Hamburg Rathaus - City Hall - where we were invited to lunch with the second Mayor and distinguished guests of the Jewish Community.

The next day, we are taken to the impressive and imposing Hamburg Rathaus – the city or town hall, constructed in the late 1800s and remarkably unscathed by the WWII bombs. The elaborate neo-renaissance architecture, the formality of embossed tableware, a super-attentive Downton-Abby-like wait staff, and a bounty of food is all lovely and appreciated by our group --but nevertheless juxtaposed with thoughts of why we are here, of the scarcity, hunger, and cruelty of the past. 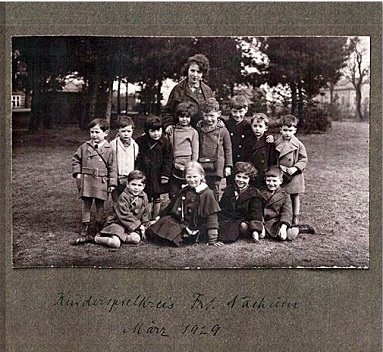 Caption: Place of Deportation -- where the Hamburg Jews were first reported to gather on November 8, 1941.  Of the 1,955 Hamburg Jews deported to the Ghetto, records show that only 27 survived.  My father was one of them. His parents and brother were killed.

Kindergarten -- Neighbors of my father's family saved four photo albums with my grandmother's inscriptions and a Chanukah menorah  - which my father retrieved after the War.

Again, the families in our program are assigned to different tables, and we find ourselves in a fascinating conversation, as we are seated with Andreas Wankum, a Member of Parliament of the Hamburg Senate. He is the only Jewish MP since WWII, when several German-Jewish senators were first ousted, banned and then eventually deported and killed.  Coincidentally, Wankum has just recently returned from a trip to Minsk, Belarus, where Presidents Alexander Lukaschenko and Ronald Lauder and about 130 German participants attended a ceremony to lay a foundation stone for a memorial dedicated to the Russian and European Jews killed in Minsk.

He shows us photos of the event on his iPhone and talk about some of the irony and controversy surrounding the occasion. I share with him not only my family’s history in Hamburg and the Minsk Ghetto, but also tell him about my work at HCS with many survivors who were also from the Former Soviet Union and were actually in the Minsk Ghetto at the same time as my family. We exchange cards, and he also gives me the one he had printed in Russian – which he uses for trips such as the one to Minsk as well as within the large Russian Jewish community in Hamburg. 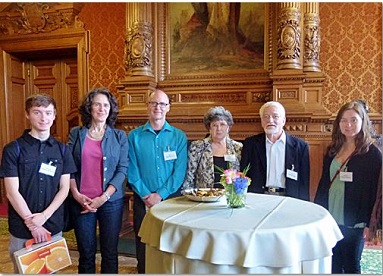 Caption: Reception -- City Hall reception with Dr. Linde Appel from the Memory Project (between Paul and Joshua) and Rolf Schuster and Sonia Kirchheimer, who now live in Uruguay.  Both were born in Germany, and Rolf spoke at the luncheon about his feelings about returning to Hamburg.

There is some welcome relief as the luncheon progresses to two short speeches; one by the Vice Mayor of Hamburg and the other by a member of our group. The Mayor finally addresses what we have felt and discussed amongst ourselves, but have not heard "out loud" from most of our German hosts -- she addresses the ambivalence, the balancing act:

“I can well imagine that this visit to Germany is not exactly a simple matter for you. I myself am a member of the post-war generation. We can only attempt to imagine the magnitude of the internal processes, the reservations and fears, all of the conflicting emotions the former victims of National Socialism and their family members, children and grandchildren must have before undertaking a trip to the land of the perpetrators.  From the many meetings I have had with persecuted former citizens of Hamburg, I am well aware of how strenuous – and how strained - a trip like this can be.  That is why I feel that the courage you demonstrate in returning to the places where you and your ancestors lived and from which many of you were deported earns the greatest respect.”

One of the survivors in our group, Rolf Schuster, also speaks, and he contrasts the time he first returned to Hamburg in 1950 with his return this week. I believe he speaks for most of us in voicing our positive impressions of this city, of gaining a better understanding of the rich and full lives lived and lost here, of appreciating the compassionate and committed individuals we have met along the way, and, of noting an unexpected spark of interest and intention in possibly returning in the future. Some of us may return - to do more research into our pasts, to forge new professional and personal relationships, and, most of all, to keep searching for that delicate balance. 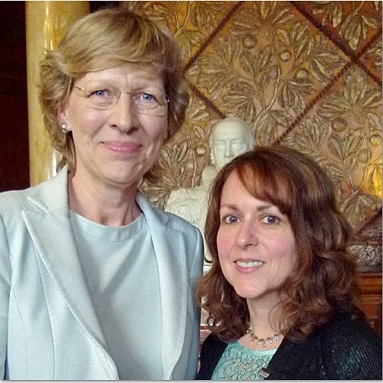 Caption: Dorothee -- Yonit with the "Second (Vice) Mayor, Dorothee Stapefeldt, after her speech at the Town Hall luncheon.

I have an opportunity on Friday afternoon to try to put into words my family’s history, the impact it has had on me as a descendant, and my impressions of the week’s powerful experiences. I am interviewed by Linde Appel, the Director of Hamburg Biographies – Workshop of Memory, and oral history archival database with over 1,000 interviews. Linde also looks through the program of my conference in Jerusalem, hoping to be able to attend and perhaps present in the future. But first, the interviewer interviews the interviewer, and we speak for more than three hours. Linde later writes to me that she feels as if we have just started a conversation. It does feel like the beginning of many conversations — but I am also relieved that tomorrow is Shabbat, a day without programming and a chance for my family and I to take a deep breath, find some balance, and prepare for the last two intense days in Hamburg.

Image caption: A Stolpersteine set in front of the City hall for a former Jewish Senator of Hamburg who was sent to his death in 1942.